România is a country in the Central Europe. It is north of the Balkan Peninsula, on the Lower Danube River. Part of Romania is circled by the Carpathian Mountains. It also has a border on the Black Sea. 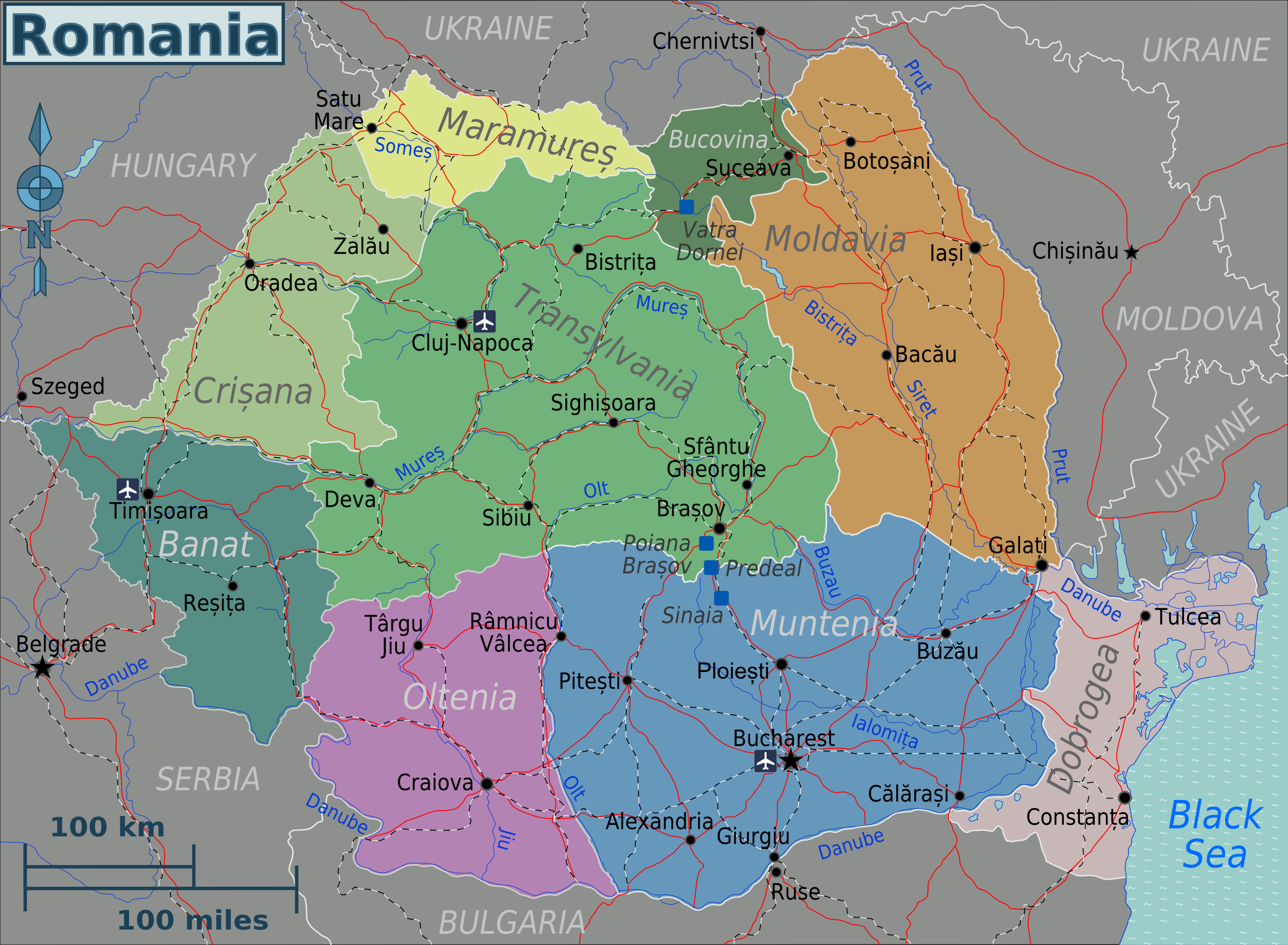 The regions of Romania

Romania shares borders with Hungary and Serbia to the west, Ukraine to the far northeast, the Republic of Moldova to the near northeast, and Bulgaria to the south.

47% of the land area of the country is covered with natural and semi-natural ecosystems  Romania has one of the largest areas of undisturbed forest in Europe. Location of the Dacians and Getae tribes in Romania, circa 200 BC

The Getae were called the Dacians by the Romans. They were Thracians who were living in Dacia, which is where Romania, Moldova and the northern part of Bulgaria are now.  The Dacians were defeated by the Roman Empire in  106 AD.

The best known ruler of this period was Vlad III the Impaler, also known as Vlad Dracula, or Vlad Ţepeş, Prince of Wallachia, during the years of 1448, 1456–62, and 1476. While he was the leader of his people, he had an agreement with the Ottoman Empire to stay independent. Many people in Romania during this time thought of him as a ruler with a great sense of justice and defense for his country.

Romania is a semi-presidential unitary state. It was created when Moldavia and Wallachia joined together in 1859.

Michael I abdicated the throne and had to leave Romania in 1947 because of the Communists. Romania changed from a monarchy into a republic. The USSR occupied Romania until the late 1950s, when Soviet troops left Romania.

Ceausescu’s rule was based on a belief that he did not want to rely on other countries, and so Romania pay back money borrowed from other countries, affecting  the Romanian economy. To try to stay in power, Ceaușescu greatly extended the authority of the police state, and imposed a severe cult of personality. All these led to a dramatic decrease in Ceausescu’s popularity and culminated in his overthrow and eventual execution in the violent Romanian Revolution of 1989; but by that time Romania’s foreign debt was almost completely paid off.

After the revolution, the National Salvation Front (NSF), led by Ion Iliescu, took partial multi-party democratic and free market measures. The subsequent disintegration of the Front produced several political parties including the Social Democratic Party, the Democratic Party and the Alliance for Romania. During the 2000s, Romania enjoyed one of the highest economic growth rates in Europe and has been referred to as “the Tiger of Eastern Europe.” It joined NATO in 2004 and the European Union in 2007.